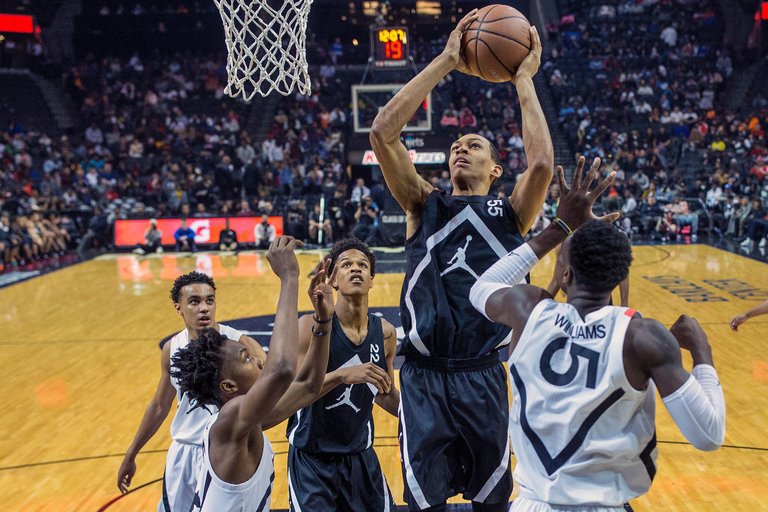 Darius Bazley is a long, skilled, athletic forward with a soft touch who, until a month ago, was expected to be one of the best freshmen in college basketball next season. A senior at Princeton High School in Cincinnati, Bazley signed a letter of intent last summer to play for Coach Jim Boeheim at Syracuse University.

But by the time the McDonald’s All-American Game rolled around on March 28, Bazley, 17, was reconsidering his options. And the day after the game, Bazley stunned many observers by announcing he would forgo college and head directly to the N.B.A.’s development league.

Several top high school players have opted to skip college and play professionally overseas since the N.B.A. implemented its so-called one-and-done rule in 2006, which requires prospects to be 19 years old and a year removed from high school to enter the draft. However, Bazley will be the first since Latavious Williams in 2009 to head straight to the development league, which announced last week that it would raise salaries to $35,000 next season, from $26,000. Bazley had foreshadowed his plan before the all-star game, saying that since coaches had told him he’d be ready for the N.B.A. after one year of college, he felt tempted to skip another year of school altogether.

“My ultimate goal is to play professional basketball, so going that route, that would be great for me,” he said.

There may be more Bazleys in the offing. Mark Emmert, the president of the N.C.A.A., has made it clear he is no fan of the one-and-done rule. He would prefer college basketball players stay in school for more than a single year once they commit to attending, but he would also like the N.B.A. and the N.F.L. to enhance opportunities for top prospects to develop outside of college. A special commission formed by Emmert to review college basketball and its persistent corruption is expected to make recommendations Wednesday that will address the one-and done rule. But it is not expected to change anytime soon, and Bazley is already making plans for a pro career.

He has hired an agent: Rich Paul of Klutch Sports, a fellow Ohioan who represents the N.B.A. stars LeBron James, Ben Simmons and J.R. Smith. Paul declined to comment for this story, and Bazley’s mother, Lynnita Bazley, declined to make him available as well.

Since Bazley made his announcement, many in the basketball world have questioned the decision. Some doubt that Bazley, who is 6-foot-9 and 210 pounds, will be able to compete with grown men in the development league, and others wonder whether this latest move will trigger a trend among future prospects, especially with the league’s salaries set to rise 35 percent.

Fran Fraschilla, the ESPN basketball analyst and former coach, predicted Bazley would play in the development league, known as the G League, for at least two years. “He’s got a chance to be an N.B.A. player some day, but given what I know about the G League, this is probably not the route I would’ve chosen,” said Fraschilla, who compared Bazley to a hard-throwing high school baseball pitcher who gets drafted and then stashed in the minor leagues.

Allen Griffin, the Syracuse assistant who recruited Bazley, was at the Fort Lauderdale-Hollywood International Airport when Bazley called him the day after the all-star game to inform him of his new plan. Bazley also texted Boeheim.

He’s been thinking about it for a couple of weeks and he thinks that’s the best route for him and his family,” Griffin said in a phone interview last week.

Griffin said he supported Bazley’s decision, but also believes he would be better prepared for the N.B.A. with a year at Syracuse under his belt. He said Syracuse will have a deep and experienced team next year, and Bazley would not have felt pressure to carry the squad.

One of Bazley’s would-be teammates, Jalen Carey, a 6-foot-3 guard from Immaculate Conception in Montclair, N.J., said he was stunned by the decision.

Carey was sleeping when father called him. He thought his father was pulling his leg. Then he checked Twitter. “I hope his plan works,” Carey said. “But he’s going to miss something big.”

Still, no one, certainly not Griffin, disputes Bazley’s talent and his reputation for unselfish play.

A consensus top-20 player in the 2018 class, Bazley averaged 17.6 points, 11.5 rebounds and 3.6 assists for Princeton. In the high-school all-star game, he scored 11 points and grabbed seven rebounds.

Can he do that next year against bigger, stronger adults?

“I’m not going to say it’s more physical than the N.B.A., but I just feel like it’s tough in the G League because everybody is trying to get to the next level,” said Fuquan Edwin, a 26-year-old from Paterson, N.J., who plays for the Toronto Raptors’ development affiliate, Raptors 905.

And yet, while it’s unclear whether Bazley will be able to hold his own physically next season, that may not matter all that much. As Steve Wright, Bazley’s high school coach, pointed out, “the N.B.A. drafts off potential.”

Wright noted that the Los Angeles Lakers chose forward Brandon Ingram with the No. 2 pick in the 2016 draft. Ingram, who attended Duke, is 6-foot-9, 190 pounds, and despite his thin frame has averaged 12.2 points and 4.6 rebounds per game. Wright said over time Bazley will get stronger, more physical and more mature, “but it’s not going to happen overnight.”

“If he’s very successful with it, then a lot more other people are going to start doing it,” Edwin said.

Emmert, the N.C.A.A. president, said last week he would have no problem with that. “If a kid wants to be a professional basketball player and he has the ability, he should be able to do that,” he said.

An earlier version of this article attributed an erroneous distinction to Darius Bazley. Bazley was the first player since Latavious Williams to join the N.B.A.’s development league directly out of high school; Bazley was not the first player to do so.